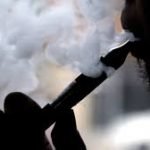 Must read report.  Will law enforcement, the courts and lawyers be able to chase down the manufacturers?

The Centers for Disease Control, the Food and Drug Administration, and the health commissioners in a growing number of states are collectively investigating more than a hundred cases of mysterious life-threatening lung ailments among teenagers and young adults who were found to be vaping what appears to be black market cannabis oil.

Health officials in Wisconsin, New Jersey, New York, Texas, North Carolina, Indiana, and Minnesota report dozens of cases of young patients showing up in doctors’ offices and emergency rooms, sometimes with lung damage so severe that one physician said she at first thought her patient had cancer.

“One eighteen-year-old boy, who almost died, had nodules (small masses) all over his lungs,” said Dr. Melodi Pirzada, a pulmonologist at New York University Langone Hospital. “We did a million-dollar workup and couldn’t figure out what caused it. He denied vaping until the family found a cartridge in his bedroom. It had cannabis oil in it. We then learned that his symptoms began around the time he started using it.” Pirzada said her patient’s lung damage is severe and permanent.